Saturday nights are alright for drinking.

The cold, wintry mix of snow and rain began to descent down towards the neon lights of the city late at night. The glowing lights reflected upon the roads that lead down to various destinations of the gunk and grime. The one in particular would be a specific bar that Cobretti is searching for... hopefully still standing in the same location. He was somewhat confined in his beaten-up automobile  whilst listening to some Muddy Waters on his tape deck. The warmth through the heater made the journey somewhat bearable for him however, he was more about wanting some bourbon to warm his nerves up. It's been exactly three years since he had alcohol and now he's hungry for it, to the point where he can almost feel it flowing down his veins. After a week of coming back to the department he once was apart of, escaping the chaos for a day was like a sanctuary and he deserved as many drinks as he can.

"That old bar is still standing.", Cobretti said to himself. He parked his car and took out his guitar case from the backseat and waltz into the opening door of warm lights. The place was packed to no surprise since it would be a Saturday night. Cobretti unzipped his leather jacket half way to let the cool breeze hit his chest and walked to the nearest booth to where he placed his guitar case down to the edge of the table. He slammed his leather-gloved fist down, "Yo! Barkeep! Drink 'round here!". The onlookers stared at the tough policemen for a few seconds then went back to either discussions or just watching Saturday Night Live on the fuzzy black and white television. A tailor-dressed, white-bearded bartender walked by and with a single wide eye said, "Marion? Is that you?". Cobretti responded, "Yup. Yah don't look much different yerself, Don.". Don left his post to give Cobretti a big bear hug, "It's so great to see you again, old friend! Looks like you're doing nice and well... not dead.".
"Not by a long shot. And who's ya callin' old, eh?"
"Well, I see a few grays coming in there."
"Quit kiddin', pal. How's 'bout a drink?"
"Of course, have a seat. What are you having?"
"Hmmmm, bourbon."
"Comin' right up."
Cobretti took the wallet out of his back pocket, "How much?"
Don laughed, "It's on the house. That is, if you tell me the whole story about how you got back here."
Cobretti looked at the bartender hard-faced, "Tell yah everything."
"Yup."
Cobretti rubbed his tired eyes, pushed his disheveled hair back and sighed, "Yeah. But it's only gonna be between you and me."
"Deal. Here you go.", Don handed him a glass of bourbon.
Cobretti took the matchstick out of his mouth, sniffed the glass slowly just to get the aroma to run through his mind and then drank it down.
"Woooooo boy. That's damn good."
Don laughed, "It's as if you haven't had it for a long time.".
Marion chuckled, "Exactly. Three years.", he held three fingers up while smiling.
The bartender was confused, "Three years? Of what exactly?"
"Prison."
"Prison?"
"That's right.", Cobretti finished off his drink.
Don looked around to see if anybody's listening and went close to him, "Are you telling me that.... you've escaped?"
"Don't be fuckin' stupid, Don. I've gotten an immunity from the Internal Affairs."
"You mean, they set you free?"
"Yup. For the moment. Slip me 'nother drink."
Don took his glass and refilled it.
"Betcha you're glad to not stay there in the slammer any time soon."
"It ain't a fun time I can tell ya that much."
"I've noticed you've brought in a... guitar case?"
"Hmmm? Yeah. Don't want no hooligans to come steal it so I brought it here."
"You afraid they might steal your car?"
"Pfft. They can take that hunk o' junk and fuck it up for all I care."
A man behind Cobretti asked, "So you's doin' a gig here? The jukebox broke."
Cobretti turned to look at the man, "Didn't know it broke."
Don noticed the policemen grabbed the guitar case and set it on the table.
"You mean, you can actually play some songs?"
"Well I wasn't just gonna babysit the damn thing. I'm still a bit rusty on a few notes."
Cobretti opened up the guitar case to reveal an archtop that's black with a white pick guard that had a picture of a cobra with arms wearing boxing gloves on it. And his guitar strap was a standard leather that had used bullets lined up in the middle throughout. He carried his pride and joy around since it was a departing gift from the state prison.
"Now where's my... shit. Left my tube in the damn glovebox."
Don handed him an empty glass bottle.
"I'm gonna have to break a part. Stand back."
Cobretti smashed the base of the bottle to only have the neck left in tact.

The loud glass smash attracted the onlookers. Cobretti stared down at the shards of glass while holding his guitar in one hand and a glass of bourbon on the other. He then looked at Don, "Don't worry, I'll fix this mess when I'm finished here.", and walked off the booth towards the small stage. The only thing that was there was a lonely microphone but no amplifier. "Don't yah have an amp?", he asked while by the microphone. Don shrugged, "We were robbed about a week ago. Still need to purchase one." Marion huffed, "Acoustic blues is my thing anyway." As he finished his drink, he placed the matchstick back in his foul mouth, placed the neck bottle on his pinky finger and began to play a strong, heavily bluesy melody. The drunken audience at this point were cheering along and clapping their hands to the rhythm.

Marion went to face the microphone and, with a match hanging down his mouth, started to sing with his deep, raspy and broken voice:

"Oooohhhhh, I'm a-comin' down the line
comin' down for a fight
if it's gonna take my whole time
well, it better take all damn night

'Cause if there's gonna be a bar fight!
There's gonna be blood and sweat!
The rougher the better, the tougher ya get
Imma gonna knock you down, you bet!

Weeeeelllllllll, I ain't goin' brag 'bout it
I'll just pull myself together
Game-faced to the fuckin' teeth
Imma gonna get tough forever

'Cause if there's gonna be a bar fight!
There's gonna be blood and sweat!
The rougher the better, the tougher ya get
Imma gonna knock you down, oh you bet!"

Then, the long-wailing guitar solo began to surround the crowd.


One of the onlookers leaned towards the bartender and asks, "Yah know this guy?"
Don, out of the trance stared back, "Yeah. Been quite a while. Used to be a regular."
"Any idea what the cobra on his guitar is all about?"
"Cobretti usually goes by the name."
"Cobra??"
"Yup."
“Is he some kinda... tough guy or somethin’?”
“Welp. He is a cop.”
Then it dawned on the drunk, “Lieutenant Cobretti?!”
“Bingo. Though not a lieutenant anymore..." then the bartender noticed the drunk ran off.
As soon as Cobretti finished off his ballad, everyone hollered for another number.
"Hold on, hold on, hold on.", Cobretti raised both his hands to calm the crowd down, "Since ya are all beggin' for 'nother number, I gots to get my voice cleared up for a sec." He then walked down the podium to get another drink, this time, a bottle of beer. Don, astonished by the performance, applauded and handed him a bottle. "I had no idea you were THIS good! When'd you learned to play like that?"
Cobretti moved his guitar on his back and responded, "Prison."
"And the guitar?"
"Prison."
“Have a name for her?”
“Name?”
“Every guitarist has to have a name for their guitar.”
“Hmmmmm. She's gotta have a tough name.”
Cobretti took a slug of his beer, “I got it.”
“What?”
“Alice.”
Don giggled at the answer.
"Yah have the answer to everything."
Cobretti grinned and nodded.
"Ya know, if I'd knew you'd be givin us a show, I woulda joined yah."
"Why didn't yah? Yah had that dobro, right?" Cobretti took another slug of his beer.
Don laughed, "That was when you threw out that guitar solo. Oh. This reminds me...", he handed the musician cop his copper tube. "Forgot I had it."
“Thanks.”
"Keep it. Call it a welcome back gift."
Cobretti placed the copper tube in his front pocket and finished off a bottle. "Well, guess it's time for another number." he got up and made his way back to the stage.
Then, out of nowhere, the hysterical drunk from earlier bumped into the guitarist.
"Watch where you're goin', cop!"
"You're the one who should be watchin' where ya side steppin'!"
The drunk then stared right at the policeman and with no hesitation was ready to fight. Cobretti just stood there unfazed.
"You were singin' about wanting to have a bar fight. Well, here I am."
Cobretti pushed the drunk aside, "Outta the way."
The drunk then grabbed his arm and was ready to throw him towards the broken jukebox but Cobretti with quick precision switched the roles and grabbed him instead, slammed the drunk on one of the dining tables. "Don't make me get rough. Cause I can get rough if ya ain't careful."
While still gaining consciousness, the drunk threw his weight and kick off of the table and was ready to throw a punch. Once again, Cobretti quickly dodges a punch, knelt down and sweeped kick, resulting the drunk to fall on the ground. "I ain't breakin' a sweat with a hooligan like you. This is your final warning."
Don and the other drunks were all watching the spectacle; they were not sure what they were in for exactly but, in dive bars like these, anything's fair game.
The drunk stumbles back up and once again was ready to fight.
Cobretti sighed and shook his head, "Christ."
"Come on! Throw a punch at me!"
Nothing.
"Come on you pussy! Hit!"
Still nothing.
"Bitch Marion! That's what you are. A bitch!"
"Yah done?"
"Nuh uh, Marion! That's a girl's name, ain't it?! Fits you well!"
The crowd gasped at the drunk's petty insults. Saying Cobretti's first name was one thing but mocking it was another. And that made his blood boil. He removed his guitar to place it on the table and stared down at the drunk.
Cobretti gritted his teeth, "You're playin' with fire."
The drunk was satisfied and was ready for whatever was about to hit him.
Cobretti gave the man what he wanted; a punch in the face!
The force was so massive it knocked the drunk out cold.
"That's it?!" Cobretti spat, grabbed his guitar and continued to walk up the stage.
Many of the onlookers surrounded the defeated drunk while mummering to themselves.
"AHEM."
Then, the drunks averted away from the knocked out hooligan to look towards the guitarist up stage.
"Where were we, eh?"
Then the cheers erupted.
Don looked on, gave himself a drink and happily smiled, "Good ol' Cobra is back." 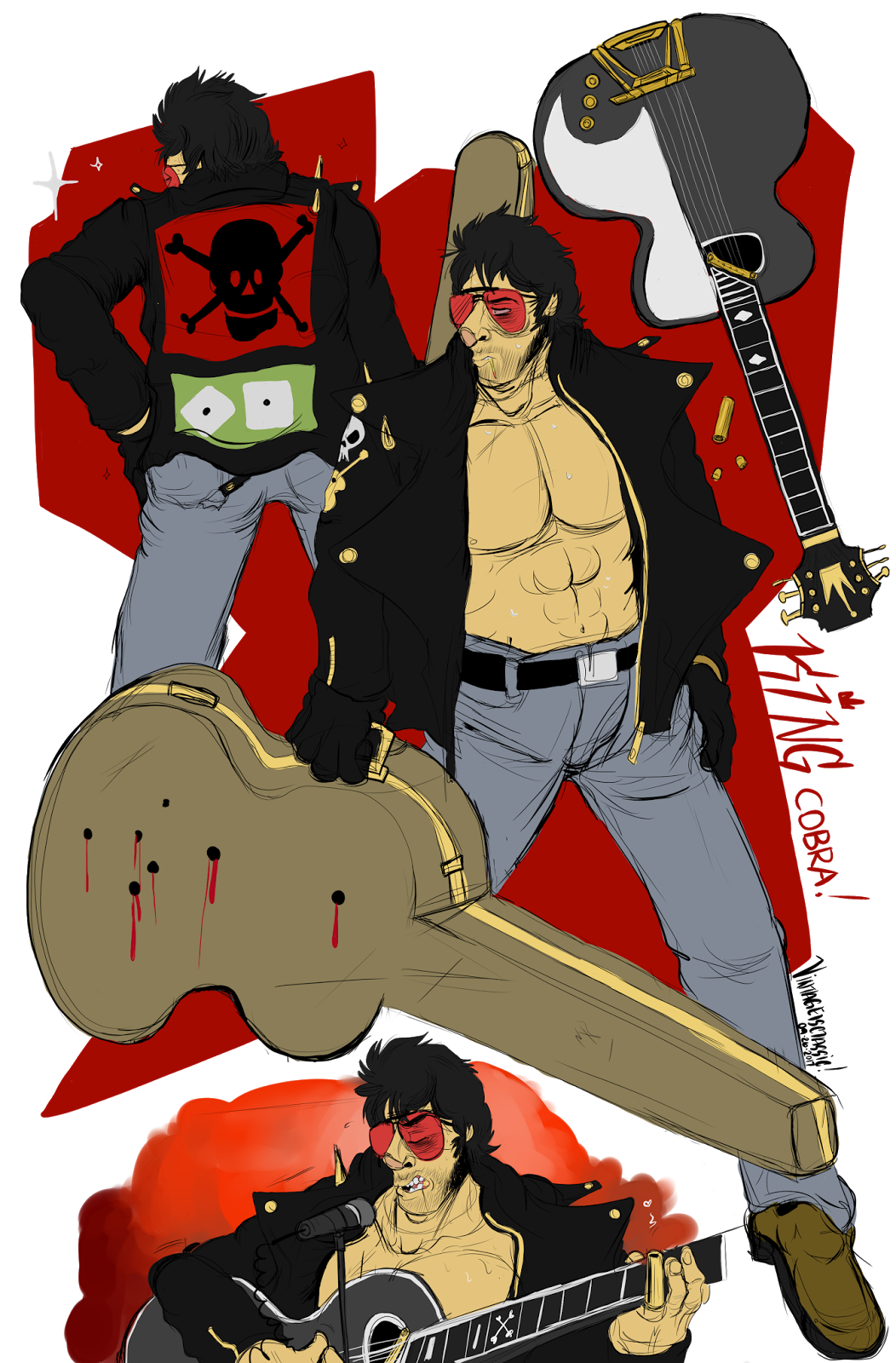